Still very slow because I am the worst kind of slacker. I showed off some of the work done so far on a stream two months ago: http://www.twitch.tv/icekitsune/c/5225315

Right now, I'm working on the stuff past the intro and fixing some of the bugs while waiting for NPC and enemy sprites to be completed for the first area. Hoping to have all that done soon.

Also we are still open to any ideas as far as pop culture references from today and the past. You can post any ideas you have in this thread here: https://kitsuria.net/parabound/pb-general-public-brainstorming-topic/
Comments: 0 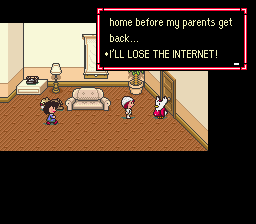 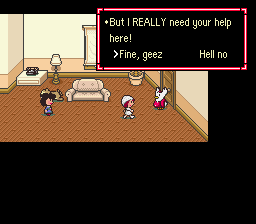 I'm slowly working on coding the beginning sequence. That is simple enough, it mostly parallels the original, except with different characters. Unlike Pokey, Delibird isn't a total jerkass. Also, there are a few minor things being changed, but it will follow the same formula to an extent.

I'm going to try an make a habit of working on this every night before work, so hopefully more progress will be made a bit faster.
Comments: 0

Progress is still slow going. Blame me for being too lazy to do some simple coding, things that should be simple as properly poaching an egg. I'm still working on the special and the beginning part of the game.

On another note, I have taken down the blog mainly because I'm not updating it enough, and I have grown to dislike WordPress. I will have a new site set up eventually once I get some things figured out and something to actually show.
Comments: 0